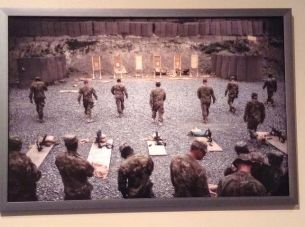 This is a follow-up to my first post about ArtPrize.  I tried to contact ArtPrize staff to find out more about the technology for the first blog, but never got a response.  This IS understandable because it was during the event and everyone was probably extremely busy.

Personally, I was a little disappointed this year.  There seemed to be less entries, more traffic, and a number of entries were not installed until late into the event.  There were “performance artists” on various street corners.  It was difficult to tell whether they were actually an ArtPrize entry or individuals just capitalizing on the event.  I suspect it was the latter. Then, there were the problems with the ArtPrize voting app.

It was reported that the voting app got bogged down with heavy traffic and was running very slowly.  During my visit one entrant told me that someone had voted for his entry but the vote went to another entry.  The artist told me that the occurrence was reported to ArtPrize, but it is unknown to me what happened or how it was remedied.

In spite of the technology glitches that occurred during ArtPrize, I agree with the results, although I would have liked to see one of my favorites in the finals (Ryan Spencer Reed).  The photos in this post are of his installation.  I think maybe the installation was too raw for some, thought-provoking, and in some ways dangerous.  “Despite Similarities to Reality, This is a Work of Fiction” by Ryan Spencer Reed held my usually short-attention span for a long time.  I was unable to talk to Reed but I did speak with “Photographic Mentor” Charles Clark, who assisted Reed with editing and writing.  I found Clark very sincere and interesting and spoke to him at length.  He told me that the photos were taken by Reed as an imbedded photojournalist in Afghanistan.  They show much more than the American people have been allowed to see, yet they were careful to be respectful.  Clark believes the government has limited the amount of information that is available to the American people.

It was interesting that although there were problems and glitches with the technology used during ArtPrize, very little was said about it by the media.  During day one of ArtPrize I was unable to get the voting app installed on my phone, and in fact my phone battery died after trying several times.  I eventually got it, but too late for it to be useful for my visit.

Wood Tv8 reported that Todd Herring, Director of Communications for ArtPrize, “said that voting on the app is down 21% while voting by text is up 15%” (Wood Tv8, October 2, 2014).  It was good planning on the part of ArtPrize to have more than one method of voting, but frustrating for those who were not aware of the text option.  This was the only mention I could find aside from some blog posts that there was a problem.  I checked Twitter for any chirps about the technology issue but did not find anything.  Why was there so little information on the glitches?  Was it due to the fact that media has partnered with ArtPrize to support the event in the community and did not want to risk offending the organizers? Could it be they are more understanding of ArtPrize’s growing pains due to the perceived benefit to the local economy and community?  Since its inception ArtPrize has been interesting, novel and innovative.  It may be that the novelty is waning, and some are feeling it is getting away from art and heading towards commercialization.

Artist Anna Lisa Schneider parodies ArtPrize with her “FartPrize” entry.  She describes her work as “a tongue-in-cheek, visual exploration of the entire ArtPrize experience.”  Schneider feels that many entries in ArtPrize are directed at a conservative West Michigan, but admits the event makes her “…giddy to have an entire city become a giant gallery for three weeks” (Fisher, 2014).  Schneider also points out that artists who want to participate in the event take a financial risk.  It costs money to enter, create, and participate with small chance of being a winner.  This brings new meaning to the term “starving artist.”

ArtPrize continues to evolve and make improvements.  I have no idea the amount of work it must be for the organizers, sponsors and artists and therefore have no basis for criticism.  I think overall the glitches have been small (or not publicized) and response from the public has been overwhelmingly positive.  There have been negative responses, but even those affirm the overall concept of ArtPrize to facilitate dialogue about art.  ArtPrize will no doubt improve its use of technology. and continue engagement with  the community through social media like Twitter and Facebook and its ArtPrize app.  The biggest challenge will be for ArtPrize to continue to attract artists without unintentionally limiting entrants to those who can afford it.